Downtown areas throughout Larimer Co. are thriving
8 area companies awarded $4.3M in contracts to work on Village at the Peaks 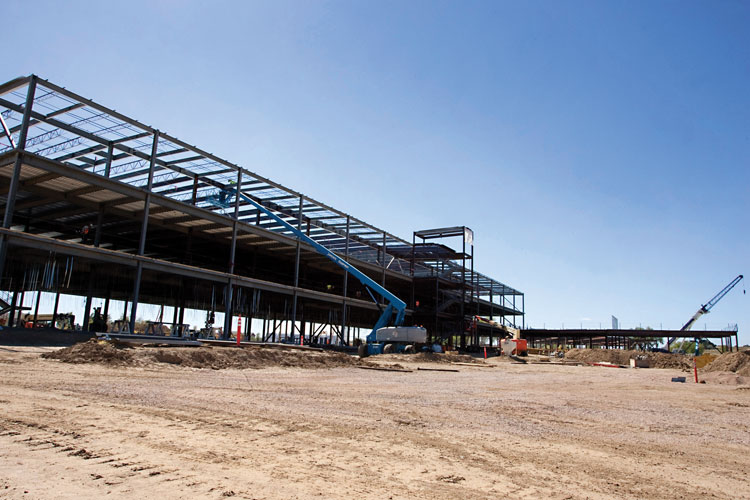 As Horace Greeley was perhaps most famous for saying, “Go west, young man,” perhaps it’s only right that the city named for him also looks in that direction for its future growth.

But it is also possible to look at the development in Greeley as if the town was a capped funnel, with the open end to the west and the closed spout to the east. Community Development Director Brad Mueller often has to take that view, knowing that the confluence of the South Platte and Poudre rivers create natural barriers to the north and east, where crossing the rivers causes significant increases in the cost of sewer and water delivery.

“Planning is an exercise in guidance,” said Mueller, noting that while large residential developments to the west have gathered news coverage, they are hardly the entire story. “We’ve also seen an increase in the amount of infill in the last five years. People are looking to areas of existing infrastructure, and we’ve seen a lot of successful infill and redevelopment, especially in downtown and around the university.”

On the western front are projects such as the Trails at Sheep Draw, a 400-home neighborhood on the southwest corner of 10th Street and 83rd Avenue. The Greeley Planning Commission recently approved the 166 acres of land to include 428 residential lots, as well as 30 acres for multi-family housing.

But while the Trails will add to other ongoing single-family residential areas, Greeley has already started fundamentally changing from a single-family focus.

“We used to be about two thirds single family homes (as compared to multi-family homes),” Mueller said. “Now we’re much closer to 50-50.”

The Greeley City Council recently approved the rezoning of 8.7 acres at 20th Street and 50th Avenue for multi-family homes, which was previously zoned for residential low density and commercial high density. While in western Greeley, across from Aims Community College, the project looks to be much more of an infill project than a march to the west.

Planning is something that Greeley appears to now be taking very seriously, as well. As part of its “Imagine Greeley” program, residents are being asked to take a long look at how this city, traditionally seen as the center for the eighth-largest ag county in the nation and a hub for oil and gas operations, might look in the year 2060.

“Over the past 10 years, the City of Greeley has gone from the top of the national charts in foreclosure rates to one of the top-ranked cities in the country for economic growth, a distinction that also pushed the city’s population above 100,000 for the first time,” said Katherine Johnson, in a report for the effort titled, Greeley Indicators 2016. Johnson is an associate professor at the University of Northern Colorado. “Over the same period, the city expanded its investment in the type of things that make this a good place to live, including new parks, bicycle lanes, and protected open space, along with major reinvestments in the city’s roads and streets and historic downtown,” she wrote in the report’s summary.

But one aspect of Greeley’s growth that is creating concern right now is a decided lack of industrial buildings. While much of the industrial zoned land is in that end of the funnel where the South Platte converges with the Poudre, the problem is not a lack of land, but a decided lack of building.

Jim Neufeld, a broker with the Re/Max Alliance Commercial Division, Greeley, said he’s never seen the market this tight. Buildings with yard space – a necessary commodity for many of the businesses operating in oil and gas service – may even be tighter, Neufeld said.

“On the east side of Greeley it’s at $10 plus, and I don’t know where the plus stops,” Neufeld said. Even buildings outside of the city with adequate yard space have been leasing much higher than $12 a square foot, he said, with oil and gas operators very much wanting to be in ready access to the highways east of Greeley.

“During the oil downturn, I saw very few properties come up for lease or sublease,” he said. “They know oil is coming back and they are not giving it up. It was tough to get in the first place.”

Spec buildings are tough to find across northern Colorado, and the lack of industrial space for small- to mid-sized building is very pronounced in and around Greeley. “We were told when the lease rates got to $10 per square foot there would be industrial development, but there’s no development here,” Neufeld said.

There has been a great deal of new industrial and industrial flex property zoned for development, Mueller said, especially near the Greeley/Weld County Airport, and including some lands to the west. While many of the newer industrial lands probably won’t service the oil and gas sector, Mueller said, that’s also part of the plan.

“We know there is a need for additional industrial, especially with the focus on energy in both eastern area and the corridor to the airport,” he said. “But we’ve also added quite a bit of lighter industrial.

“We see there a real place for additional research facilities, such as in animal health or crop science, research into irrigation and manufacturing,” Mueller noted. “We would envision all of those happening.”