How Your Credit Can Drive Up the Cost of a Mortgage 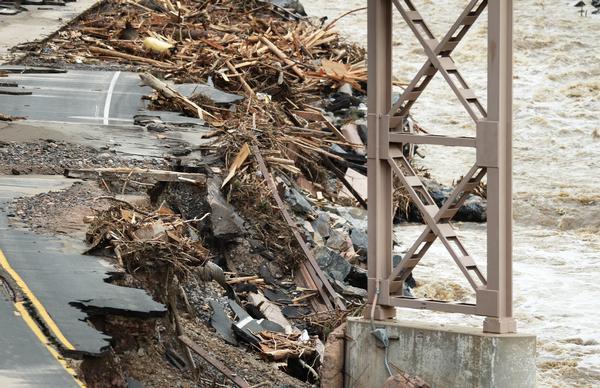 WASHINGTON — Colorado’s congressional delegation is racing against a potential government shutdown and the coming winter to usher federal flood help to the state.

Colorado’s two Democratic Sens. Mark Udall and Michael Bennet and Republican Rep. Cory Gardner introduced legislation in their respective chambers Wednesday that would lift a $100 million cap on how much federal money can be shipped to states for disaster highway repair.

The senators were delayed by Texas GOP Sen. Ted Cruz’s 21 hours of protesting the Affordable Care Act. Gardner had to wait until the U.S. House of Representatives gaveled in for the first time this week Wednesday afternoon.

The current $100 million limit has been lifted with other natural disasters, including Hurricanes Sandy and Irene. Gov. John Hickenlooper said roughly 200 Colorado highway lanemiles must be reconstructed, and at least 50 bridges will need significant repair. (Helen H. Richardson, The Denver Post)

> Resident Judd Payne hauls supplies to Pinewood Springs on the back of his ATV on Sunday. He’s using the residents’ new trail next to the Little Thompson River and what used to be U.S. 36. Residents, concerned about their property and never getting help, have taken things into their own hands.

These highways are in need of repair before the snow starts falling in lower elevations.

Bennet, Udall and Gardner hope to use speedy procedures to get the measures passed without a lot of noise and debate, though Gardner said it was possible it would be tucked in the continuing resolution to fund the federal government — something already larded with noise and debate.

“There is lots of room to make this work,” Gardner said Wednesday. “We’ll look under every nook and cranny to get it accomplished.”

He declined to say how he would vote if it was included in the funding measure, and Obamacare was also funded.

Gardner supports funding the federal government and does not desire a shutdown but believes Obamacare should be delayed or defunded as part of this process.

The battle over Obama- care and the possibility of a government shutdown means lots of uncertainty with flood relief. Already a band of Utah National Guard engineers has been sidelined for a week because the Pentagon is unsure whether funding will continue next week.

Colorado’s delegation also pushed HUD Wednesday to speed up assistance for rebuilding efforts through a program that would funnel federal money to communities and neighborhoods to rebuild.

HUD has $9 billion in unallocated money for this area.

“The Colorado delegation has worked very well together, and we know we don’t have time to waste,” Bennet said Wednesday. “I think the (Obama) administration understands the urgency of the situation.”